August 2019, PALM BEACH COUNTY, FL – The Business Development Board of Palm Beach County (BDB) not only assists corporate relocations and expansions, but also supports local companies and promotes the area as much as possible. In Florida Trend’s most recent magazine, Palm Beach County-based activity is prominent, thanks to recent economic development and community collaboration efforts.

Two recent BDB-facilitated projects were highlighted throughout the publication. “Software company Levatas will relocate its 100 employees and headquarters in 2020 to Rosemary Square in downtown West Palm Beach, adding 50 jobs paying $105,490 on average,” stated Florida Trend. The BDB assisted the Levatas team in the search for office space and assisted with a $350,000 Qualified Target Industry (QTI) Tax Refund from the State of Florida. 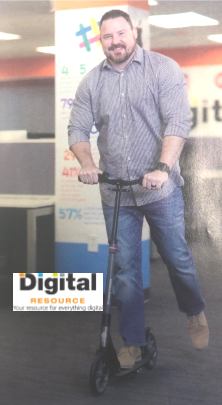 Digital Resource, also a recent BDB project, was acknowledged for the way it attracts talent while experiencing rapid growth. According to the article, the company’s annual revenue has gone from $2 million in 2017 to a projected $7 million for this year. When interviewing Facebook Advertising Manager Nathan Mendenhall, he stated, “The opportunity came to me. The job market for this career is very hot right now.”

In the Biomed section, Palm Beach County shined bright for its community effort in growing the life science industry. While Florida’s life science recruitment efforts were analyzed as a whole, it stated, “Scripps Florida and Max Planck have thrived.” Over a decade ago, the BDB recruited the world’s top two stand-alone scientific institutes for biomedical research to Jupiter and the momentum has been growing ever since. According to the National Institute of Health, Palm Beach County was home to six institutions that received NIH funding in Florida just this year, resulting in 78 awards year-to-date totaling more than $44 million in funding.

Throughout the entire state, 12 of the “Best Companies to Work for in Florida” were located in Palm Beach County, ranking companies of all sizes. BDB members on the list included Gunster in West Palm Beach for its community involvement, Daszkal Bolton in Boca Raton for its work-life balance, and Plastridge Insurance in Delray Beach for its support in recognizing employees. Plastridge was also listed in the “Movers and Influencers” section of the magazine, noting the company’s leadership skills and celebration of 100 years of operation.

It’s apparent that Palm Beach County’s economy is hot and will continue to grow for years to come. In fact, the BDB recently announced 28 companies relocating to or expanding in Palm Beach County, creating 1,800 high salary jobs for Palm Beach County residents. All 28 companies have one thing in common; they have relocated or expanded using the BDB’s complimentary services. Whether it’s expedited permitting, making the right local connections, finding commercial or industrial space, or applying for grants that the company wasn’t aware of, the BDB is the economic development engine for Palm Beach County and will continue to share everyone’s success as much as possible.