Lake Worth, Fla. (Nov. 8, 2017)—Dr. Guy Harvey, a marine biologist who gained international recognition for his paintings of sea creatures, will be the keynote speaker for the Palm Beach State College Foundation 2018 STEAM (Science, Technology, Engineering, Arts and Math) luncheon. 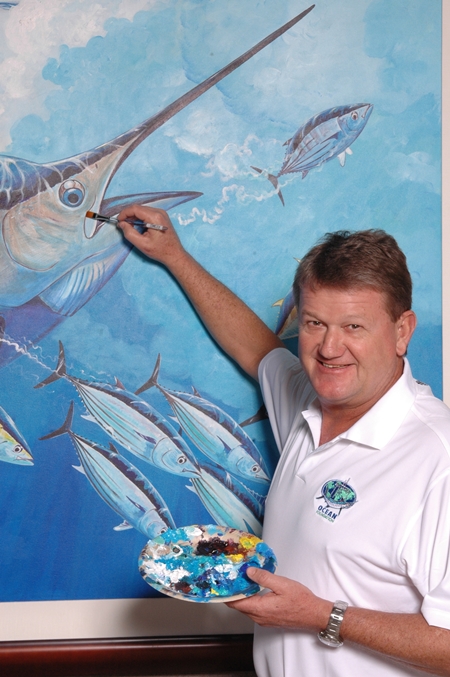 The affair, presented by Bank of America and chaired by South Florida businesswoman and philanthropist Yvonne Boice, is set for 11:30 a.m. Feb. 7 at the Kravis Center for the Performing Arts Cohen Pavilion in West Palm Beach. Tickets are $150. A table of 10 is $1,500.

Harvey’s passion for the ocean and its living creatures dates back to his days growing up in Jamaica. He spent many hours fishing and diving with his father along the Island’s south coast. He began drawing pictures of the many different fish he observed.

This love prompted him to pursue a formal education in marine science. He graduated with honors in marine biology from Aberdeen University in Scotland in 1977, and returned home to Jamaica to resume his education, earning his Ph.D. from the University of the West Indies in fisheries biology in 1984.

He became a professor of fisheries biology for a short time but eventually pursued his love of art full time after selling all of his artwork at his first appearance at a Fort Lauderdale Boat Show. Harvey’s brand was born shortly afterward. His depictions of sea life, particularly marlin and dorado, are now reproduced in prints, posters, T-shirts, jewelry, clothing, and other consumer items. He’s also become known for his techniques in photographing and filming aquatic life.

Suellen Mann, executive director of the PBSC Foundation, said Harvey’s appearance comes at an ideal time, given the College’s launch this summer of The Reef Hope Project. Led by PBSC professor Dr. Jessica Miles, the initiative allows students to study and experiment with over two hundred one-ton artificial coral reefs built by a local nonprofit organization and placed 1.5 miles northeast from the Jupiter Inlet.

During the STEAM luncheon, Harvey will discuss his travels to better understand the habits and habitats of the marine wildlife he paints, discoveries in deep sea research and his work in marine conservation efforts including those to help save the world’s coral reefs. According to the World Wildlife Fund, roughly one-quarter of coral reefs worldwide are already considered damaged beyond repair, with another two-thirds under serious threat.